Charging up Jersey with the Polar network 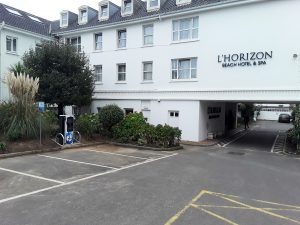 The Polar  network has reached the Channel Islands, with not one but two rapid chargers installed on picturesque Jersey coastline.

The modern 50kW units have been installed at hotels, L’Horizon Beach Hotel and Spa in Saint Brelade’s Bay, and Grand Jersey Hotel and Spa in Saint Helier, offering electric vehicles drivers an ideal destination while they charge up, with many amenities available on both sites as well as beaches within walking distance.

L’Horizon Beach Hotel and Spa, Saint Brelade’s Bay, JE3 8EF
Located adjacent to St Brelade’s Bay beach, you can find the site on La Route de la Baie, just off the A13, with the Ultracharge unit located in the main car park. The hotel has a number of nearby attractions and dining options alongside the hotel’s own on-site restaurant; with the charger open to both guests and short-term visitors.

Grand Jersey Hotel and Spa, Saint Helier, JE2 3QA
You can find the Grand Jersey Hotel and Spa just off the Esplanade between the A2 and A1, with the rapid charger in the main car park of the hotel. The site is a great location, just a short walk to the beach as well as multiple public parks, including Victoria Park and Les Jardins de la Mer, and dining options.

Both sites are available on the Polar network, the UK’s largest electric vehicle charging network, with access via a Polar RFID card at 9p per kWh (+VAT) for Polar Plus members, and £6 for 30 mins on the Polar Instant PAYG app (plus a connection fee of £1.20). Contactless payment is also available on both units at a rate of 22p per kWh.